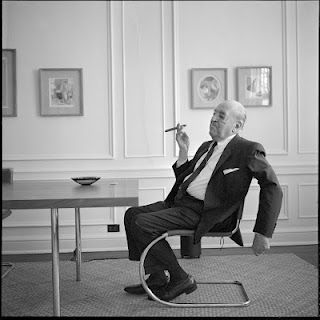 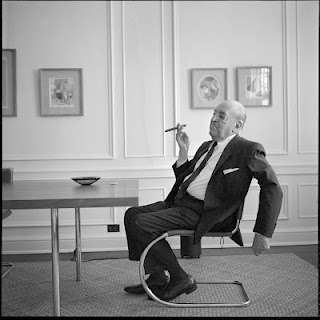 In honor of German-born architect and designer Ludwig Mies van der Rohe's 126th birthday we would like to say, Herzlichen Glückwunsch zum Geburtstag, Mies! To celebrate the German master of post WWI architecture, we'd like to share a couple of our favorite highlights in the life and career of one of the 20th century's greatest architects and designers.

Barcelona PavilionDesigned in 1929 as the German national pavilion for the 1929 Barcelona International Exhibition, Mies' Barcelona Pavilion is a site not to be forgotten. Built from glass, steel and different kinds of marble, the Pavilion was conceived to accommodate the official reception presided over by King Alphonso XIII of Spain along with the German authorities. After the exhibition the Pavilion was disassembled. In 1980, efforts were put into motion to reconstruct the Barcelona Pavilion based on Mies' original design on the actual site that the structure had stood in 1929. The recreated design was finished in 1986 and used the same materials: glass, steel and four different kinds of marble. One of Mies' most recognizable creations, the Barcelona Chair, was introduced with the Barcelona Pavilion. Also designed in 1929, this popular chair brought elegance and new life to the otherwise monotonous materials of steel and leather making it an icon of modern design. 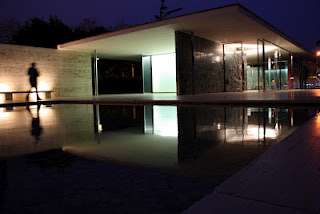 Overlooking the Czech city of Brno, the Tugendhat House, fully designed by Mies, stands. Recently reopened in February 2012, the newly renovated structure remains true to the architect's original designs and aesthetics implemented in 1930. Mies dealt with an extreme slope that the house was to be built on by dividing the front and back of the house into public and private facades. Facing the street, the building is seemingly only one story, but it is two stories on the more private garden side. The home's decor was made up of several of Mies finest pieces of original furniture, including the Brno chair, the Tugendhat chair, and the X coffee table. All of these designs express Mies' attraction and need of simplicity and also used his hallmark materials of leather, steel, and glass. During this same time, Mies became the director of the Bauhaus School focusing the curriculum on form and function instead of fine arts and politics. The school was later closed in 1932 by Mies due to pressure from the Nazi party's declaration that the principles of the school were "un-German".Following his 1938 immigration to the United States, Mies van der Rohe continued to design and create structures that exemplify modern architecture. Structures like campus of the Illinois Institute of Technology. Not since Thomas Jefferson's University of Virginia (1819) had an American campus been the work of a single architect. Mies also went on to design some of the nation's most recognizable skyscrapers, including the Lake Shore Drive Apartments in Chicago and the Seagram Building in New York City with its iconic amber glass. Mies later died on August 19, 1969 in Chicago after a long battle with esophageal cancer and pneumonia. His legacy lives on in his designs and architectural masterpieces. The Mies van der Rohe Society of the Illinois Institute of Technology sum up Mies' vision quite nicely: 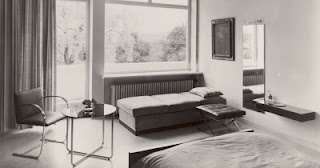 "Our built environment is meant to be lived in. Mies' buildings, beyond merely affecting our lives, endow them with greater significance and beauty. His buildings radiate the confidence, rationality, and elegance of their creator and, free of ornamentation and excess, confess the essential elements of our lives. In our time, where there is no limit to excess, Mies' reductionist approach is as pertinent as ever. As we reduce the distractions and focus on the essential elements of our environment and ourselves, we find they are great, intricate, and beautiful. Less is more."