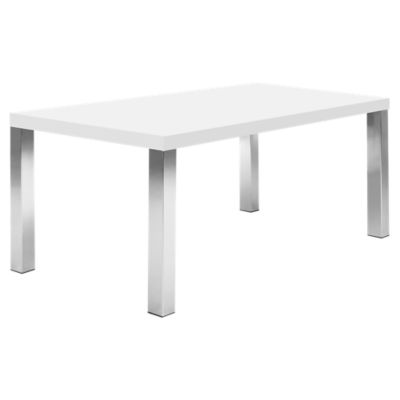 THIS ITEM HAS BEEN DISCONTINUED AND IS NO LONGER AVAILABLE.

Though this item is long gone, we’ve curated a few other products that you might also be interested in. Check them out!

People Who Looked At This Product Also Shopped For:

At A Glance:
The Multi 160 Square Chrome Legs Table adds definitive modern style from the dining room to the home office. Functioning beautifully as a desk or as a dining table, you'll be able to enjoy everything from homework to hosting feasts.

Also In This Collection

Portugal is a land of lush green vegetation and beautiful clear blue seas. TemaHome's green heritage and deep respect for Mother Nature is a constant in their every day life. The Portuguese soul has always been in balance with the environment, way before it was a global trend.

The essence of their eco-friendly policy is to achieve the co-existence with the natural environment and eco-system, under this principle; TemaHome exercises four basic concepts at everything they do. They are:
1. They focus in "producing more from less" and "upgrading resource productivity," to reduce the material intensity and energy intensity of commodities. They are dedicated to cutting the consumption of unnecessary raw materials, processes, and energy, always producing the lowest quantity of waste material.
2. They pay attention to the concept of "design for environment" during the development process, and produce eco-friendly products.
3. They operate a strict quality control department that monitors incoming resources assuring that no protected wood species are ever used in their products and that all of their vendors comply with their environmental regulations.
4.They are active members of the EU's GreenDot society, a Pro Europe (Packaging Recovery Organization Europe) initiative for recycling natural resources.

At Temahome, they believe in building a better tomorrow, today.

TemaHome counts with more than thirty years of experience in the furniture and lifestyle industry, having points-of-sale spread throughout thirty different countries around the world. It was firstly founded in 1981 as "Norema Portuguesa," resulting of the junction of two companies: the Norwegian Norema SA and the Portuguese Mendes Godinho SA. Together, their aim was to combine Norway's high technology, with the Portuguese efficiency at reasonable costs for furniture production.

Between the years 1984 and 1994, the company gained recognition by manufacturing a line of modular furniture for some of the most important retailers. This situation contributed to improvements in the production processes, and consequent optimization of the costs involved. In 1995, the Norwegian partners took complete ownership of the company. From that point on, the production was mainly focused on furniture for kitchens, bathrooms and living spaces, directed exclusively to the Norwegian market, where the company maintained its own flagship stores.

Following these steps, in the year 2000 the company was named "Tema" by its new major shareholder, the British 3i group PLC. At that point, the company's ownership was composed by four different stockholders: the British 3i (41.50%), the Spanish MCH, the Portuguese ESCAPITAL and Tema's management team. Later, in 2006, a new ownership structure was again defined, this time by a management buy-in headed by a new management team.

Today, TemaHome produces a collection of contemporary furniture and decorative accents, that combine modern lines and award winning designs by some of the most respected Portuguese designers, such as Fernando Brízio and Filipe Alarcao. This attention to the design of each product, results in timeless pieces that can fit into an endless variety of contexts.

Options are good. Here are your 3 shipping options:

Simple Scheduled Delivery is for folks that don't mind carrying furniture. The shipper will call prior to delivery to arrange an appointment, but the driver will not bring the furniture inside.

This product is subject to Smart Furniture's 45 day returns.