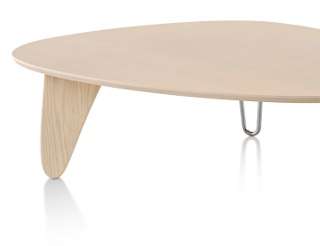 At A Glance:
The Noguchi Rudder Table, designed in 1949 (two years after the celebrated, glass-topped Noguchi Table was designed), has been re-introduced by Herman Miller. This is good news for those who love iconic, groundbreaking design. The Rudder Table is made from a single piece of solid wood, with two bent chrome legs and one "rudder" leg made from the same wood as the top. It mimics the same shape as the glass-topped Noguchi Table, but with a much lighter, cleaner presence.

Bottom Line:
Whether you're an Isamu Noguchi fan, a lover of sculpture, a mid-century modern collector, or just someone who can appreciate beauty in whatever form it takes, the Noguchi Rudder Table should be right up your alley. This coffee table won't make everyone happy, but the ranks of those who love its form and material quality will be far larger.

Isamu Noguchi
Japanese-American designer, Isamu Noguchi, left medical school at Columbia University to attend sculpture classes at the Leonardo da Vinci Art School. Within three months, Noguchi had his first exhibition and was elected into the National Sculpture Society. Noguchi not only worked in sculpture, but he designed sets and costumes for the New York City Ballet and the Martha Graham company. His work can be seen throughout the United States and Japan. Toward the end of his life, Noguchi ensured his collection would be available for public viewing at the Noguchi Museum in Long Island, New York.

"Everything is sculpture," said Isamu Noguchi. "Any material, any idea without hindrance born into space, I consider scuplture."

Noguchi believed the scupltor's task was to shape space, to give it order and meaning, and that art should "disappear" or be as one with its surroundings.

Unwilling and unable to be pigeonholed, Noguchi created sculptures that could be as abstract as Henri Moore's or as realistic as Leonardo's. He used any medium he could get his hands on: stone, metal, wood, clay, bone, paper, or a mixture of any or all--carving, casting, cutting, pounding, chiseling, or dynamiting away as each form took shape.

"To limit yourself to a particular style may make you an expert of that particular viewpoint or school, but I do not wish to belong to any school," he said. "I am always learning, always discovering."

His relationship with Herman Miller came about when one of his designs was used to illustrate an article written by George Nelson called "How to Make a Table." It became his famous "coffee table," and it's as appealing today as it was then. The Noguchi Coffee Table continues to grace living rooms and offices with its sculpted appearance.

This 1949 design by Isamu Noguchi follows his more famous Noguchi Coffee Table of 1947. The Rudder Table shares a near-identically shaped and sized top as the glass-topped Coffee Table, but with a more airy, nautically-inspired base. The table’s name stems from the character of its single wood leg support, which is reminiscent of a ship’s rudder. Paired with two metal hairpin legs, the table seems to visually rest on the rudder leg, lending a visual lightness and grace to the whole.

Service includes delivery of high value, large, extremely heavy and or extremely fragile items. Delivery is made inside the first room of your home or business. This service does not include unpacking, assembly or debris removal. Deliveries are generally made within 3-10 days from the time your order ships, and occur Monday through Friday. After hours and weekend deliveries can also be arranged upon request. Day and time specific delivery appointments are required, and someone must be present to receive the order.

White glove delivery is our deluxe delivery option. This service includes a delivery appointment, placement inside your room of choice (two flights or 20 stairs max), unpacking, set up (up to 30 minutes without tools) and debris removal. If you truly want a no hassle delivery experience, this is your best option.

The Noguchi Rudder Table comes with a 5-year manufacturer's warranty.