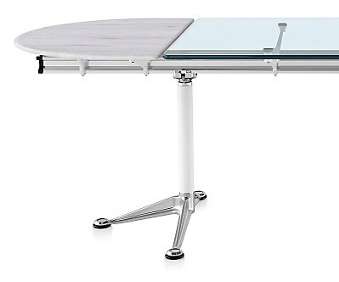 At A Glance:
The Burdick Table is more than just a dining table or conference table. It's a fully functioning table system. The table is available here in oval form but, with a huge variety of sizes and the possibility of expansion later, it is adaptable beyond that. As a dining table, it is an example of how beautiful and sculptural aluminum and glass look when combined. Fit for the finest of homes.

During Bruce Burdick's early years, he was fascinated by the creativity to which he was exposed as he grew up in California. Industry, the Arts, and architecture combined to give him an interest in design,and he attended the University of Southern California and the Art Center College with the purpose of learning how to make things.

While a junior at the Art Center, Burdick had the opportunity to work at the Eames Office with Charles and Ray themselves. He went on to graduate and work with another pair of well-known designers, John Follis and Herb Rosenthal. In 1970 he struck out on his own and the Burdick Group was started.

Since that time, Burdick's office has been involved in  the design and development of environmental education centers, a museum of oceanography, and the concept planning for the Institute of Automotive Science and History. His first project for Herman Miller, the Burdick Group system, was named one of the Best of 1981 for Industrial Design by Time magazine - after having received design awards from the Institute of Business Designers and the Industrial Designers Society of America the previous year.

The current lead time for the Burdick Table is 10 - 12 weeks.

The Burdick Table comes with a 12-year manufacturer warranty.